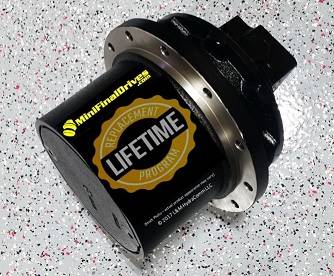 If you've spent much time around people in the heavy equipment industry, you've probably heard a lot of different terms used to describe a final drive motor for an excavator. You've probably also heard a number of different terms used for a backfill blade, since it also gets called a dozer blade, and if you're newer to the industry, you've likely been part of conversations that felt like they were taking place in a foreign language.

Heavy equipment can be like that. Here at Mini Final Drives, we regularly hear about a half a dozen different names for the final drives we sell. It doesn't phase us, because we've been in the heavy machinery business for over 50 years, and we're fluent in the language of excavators and other heavy machinery.

Whether you're new to this space, or you've been in it for decades like we have, it can be helpful to know what others might call that thing you call a dipper. Here's a glossary of sorts, in no particular order, and an occasional further explanation about how some terms came about. Whether you have a Kubota, Volvo, Yanmar, or John Deere final drive, the lingo stays the same, so these definitions apply to any and all equipment.

Final Drive Motor. As a complete unit, an excavator final drive motor provides the power to turn the tracks and move the excavator. Simply stated, it is composed of two primary components that are sealed and joined together – the first is the hydraulic “motor” that receives energy from the main hydraulic pump. The second part is the gearbox, which is called the “final drive,” because it is, as stated in the Google dictionary, “the last (final) part of the transmission system...”

So what is the final drive? The final drive is the planetary gearbox that protrudes through the track sprocket and contains a couple gear oil fill/drain plugs (see our other articles about the importance of maintaining that gear oil!). In our experience, 90% of people in the heavy equipment industry simply use the term "final drive" to describe a final drive motor, but technically the "final drive" is only the gearbox portion, which would, of course, not work without the hydraulic motor to supply the rotational power. Due to the relatively high cost of parts and labor to join these two sections, mini and midi excavator Final Drive Motors with Travel Motors are rarely sold separately because it isn't cost practical (unlike on much larger machines where it is more economical), so you will likely need to replace both portions with a complete, new, pre-assembled unit when either reach end of life.

Grousers. Your excavator or dozer's tracks need good traction in order to operate in most conditions. Grousers are the protruding portions on an excavator's track that rise up like zipper teeth. They increase traction. They also sometimes get referred to as cleats, and if you've ever played soccer, football, baseball, or golf, you understand why.

The Boom and The Arm. The angled arm on your excavator is called the boom, and the piece that's pinned to the boom is called the arm. Boom as a term, is pretty universal, except for knuckle booms, which can move to the right or left. The arm can also be referred to as the stick or the dipper. How far an excavator's arm can extend is referred to as its reach.

Ground Clearance. Ground clearance refers to the space between the machine's undercarriage and the ground, between the treads. If you're operating a piece of heavy machinery, keeping your ground clearance in mind is an essential part of doing your job well, so you don't get high-centered, stuck, and risk damaging your machine and losing time.

House. The house isn't just the cab that sits on top of the undercarriage where the operator “lives.” When people in the heavy machinery industry refer to the house, they mean the cab, the fuel tank, counterweights, the hydraulic tank, and the engine.

Counterweights. Counterweights, depending on the age of the excavator you're working with, can be made out of cast iron, lead, concrete, cast steel, you name it. They provide a “counterweight” to the load, balancing it and making it more stable, which also uses less energy and causes less stress for the machine.

Swamp pad. Also called a swamp mat and a wetland mat, a swamp pad is a large, usually wooden pad placed underneath the tracks on a dozer or excavator anytime the ground is soft, often from water. It works by spreading out the machine's weight so the tracks don't sink into the ground and get stuck. Rubber Duck. Known more often as a wheel excavator, a rubber duck is just an excavator that has wheels instead of tracks. The origin of the slang term rubber duck is disputed. Some say it refers only to the rubber wheels, while others claim it's a reference to how the wheel excavator wobbles back and forth on certain ground conditions, kind of like a rubber duck in the bath.

At MiniFinalDrives, we don't care what you call it, especially when it comes to final drives. If you call us and say you need a Caterpillar final drive, Kubota final drive, or a "track drive motor for a Kubota KX91-3 mini excavator", we know exactly what you mean and what you need, which is a complete final drive and travel motor for the Kubota KX91-3, fully assembled and ready to install! Just give us a call to chat - we're always glad to help you find the right final drive motor solution to keep your machine moving! And if you have any questions about heavy equipment vocabulary, we're glad to help out with that too.

Our family at Mini Final Drives has been providing excellent Quality, Value, and Service for over 50 years, and you can continue to count on us for a lifetime of friendly, helpful support for all your final drive and travel motor needs. Call us today at 877-483-2806 or visit our online store at www.minifinaldrives.com to find and order what you need today for Fast and Free delivery to your door.